Jackie Small shares about her promotion to a new dual role: Director of Vocational and Motivational Enhancement Counseling (MEC) services. 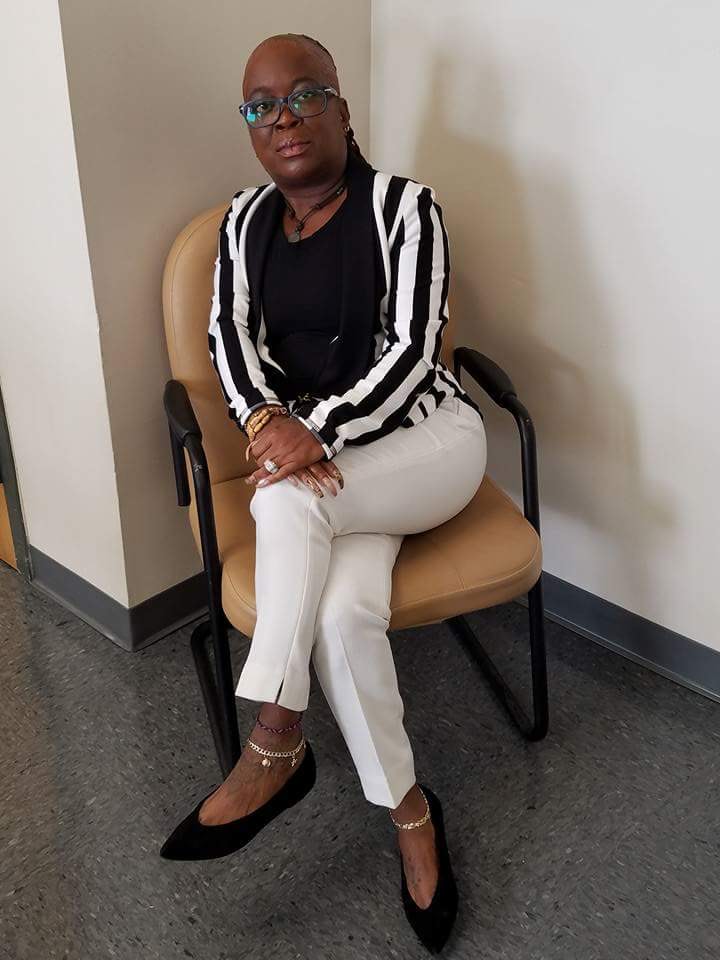 Jackie, you were recently promoted, what is your new job title?

How did you end up getting promoted and why?

I really can’t tell you how I ended up getting promoted. What I can say is that I’ve always been supportive of any other team, whether it’s the clinicians, intake, or the MEC’s, I’m always willing to help out any way that I can. About three weeks ago, I was asked if I’d be interested in supervising the MEC’s. I was like, okay, what does that entail, what does this look like? They gave me some ideas, we talked about having a dual role because I’m still the Director of Vocational Services. I just want to make sure that I can still remain committed to vocational services. I know most of the staff, I’ve been helping them out a lot. So I didn’t say no, I was like, I’m up to the challenge. There are some things that I can see really need to be changed about the way we do things on a daily basis. I always thought that the MEC’s felt that they were the underdogs and did not receive proper recognition. If I can get the MEC program up and running, I’m willing to do that. I want to see everybody be able to do their job without feeling stressed out or overlooked. I want to put a system of checks and balances in place to make sure everything is running smoothly. I think the MEC’s just need to be supported with the right supervision and they need to know that as a team it can be done.

What do you think are the greatest challenges that the MEC team is facing?

I think they just felt that they couldn’t make a decision without getting approval from managers and other people.  I think they need to be put in a place where they can make a decision and then they make the management team, the clinical team, and so on, aware of what that decision is and why they made it at that moment. A lot of times they have to make a decision right then and there, they can’t wait 24 hours for feedback.

Can you think of an example of a decision that they have had to make recently without having time to wait for approval from a manager?

It could be somebody wanting to go home, or somebody wanting to receive a package, and they have to explain why they cannot over and over. Or they want more hours to be out, it’s many different kinds of issues come up in a residential program. Recently, we have a lot of people who wanted to bring food back into the program, which we don’t allow. So we explain to them if you’re out on a doctor’s appointment, or whatever the case may be, you can grab a bite to eat, but you can’t bring it back. That became an issue because the clients are like ‘what am I supposed to do, eat it on the street? Nothing’s open.’ It’s hard for the MEC’s to make those types of decisions and then need to justify and explain them over and over to the clients about why they’re telling somebody no. So I think it just becomes an issue where they have to play a middleman about the rules of the program during COVID.

As the new MEC Director, what changes would you like to make to make things easier for them?

One of the ways I’m planning to support them is to promote two people to become motivational coordinators. I think having an A and a B team will make it easier for them. So you know who’s your go to person or you know how to delegate every assignment to people, and that way folks know where they need to be and what they need to do. I think it’s confusing in the current system where you have a bunch of people doing one thing, and then nobody’s doing the other thing. I think it’s important to delegate the work by giving people tasks and coaching them to get the task done. You know, and if they need support first to lean on each other as a team before they even bring it to management.

How have you been finding your new role so far in general, what had your experience been like?

My experience has been busy. I have a lot of new staff that started just started prior to me taking this position, I’m getting to know them and they’re getting to know me. It’s important to get to know each person, not just as a collective body of people but as individuals, who are you and how can I support you? Somebody may want to return to school, somebody down the line may need to have their hours changed. It’s a lot at the beginning, but it’s a good a lot, it’s putting things in place so they can do things on their own.

What in your words is an MEC and how is it different from let’s say a Peer Navigator?

An MEC is someone that can run groups–they should at least have a CASAC or a CASAC-T. They deal with a lot of behaviors, whether positive or negative. And they’re the eyes and ears of our program, they are really the heartbeat of our program. Without the MEC’s, many people would be scrambling trying to figure out how to do the things that they do on a daily basis. There’s a lot of layers to what the MEC staff does, whether it’s running morning meeting or the house meeting, there’s a lot that they do. The peer navigators are more peer support so they deal with a customer differently than an MEC. A peer navigator may provide support if someone lost a family member or if they need to go to court or the DMV. But the MEC’s are the ones that are there 24 hours a day 7 days a week, including holidays and weekends.

In terms of the vocational portion of your work, which is your original position, what is it been like to support clients in trying to achieve their vocational goals in this unprecedented time with COVID? I imagine it’s probably been pretty challenging?

Well, it was challenging up until I would say two months ago. The biggest challenge was folks that were trying to get employment. They were having a real hard time securing employment through this pandemic, so we came up with other creative ways to support them. So we would say to them, you know, maybe this is the time you go back and you get certified, whether you want to do security, or if you want to work in the office maybe you go back and get a certificate in Microsoft Office, something else to add to your resume. A lot of them took that suggestion and went back and got a certificate of recovery, coaching or whatever they are interested in. They took advantage of it and now we’re starting to see people custom with a thought and to get employment now, so I’m happy about that.

What do you think has recently changed that it’s becoming a bit easier now to find a job?

I think businesses are slowly but surely starting to open back up. And people that were let go or furloughed or took unemployment, some of those folks are not returning, so it gave other people an opportunity.

I want I want to be given an opportunity to work with the MEC’s and for them to look 90 to 120 days from now and see what changes have been made.